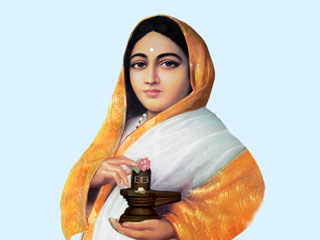 Maharani Ahilyabai Holkar (31 May 1725 – 13 August 1795) was the Holkar Queen of the Maratha Malwa kingdom, India. Rajmata Ahilyabai was born in the village of Chondi in Jamkhed, Ahmednagar, Maharashtra. She moved the capital to Maheshwar south of Indore on the Narmada River.

Ahilyabai's husband Khanderao Holkar was killed in the battle of Kumbher in 1754. Twelve years later, her father-in-law, Malhar Rao Holkar, died. A year after that she was crowned as the queen of the Malwa kingdom. She tried to protect her kingdom from plundering invaders. She personally led armies into battle. She appointed Tukojirao Holkar as the Chief of Army.

Rani Ahilyabai was a great pioneer and builder of Hindu temples. She built hundreds of temples and Dharmashalas throughout India.

Ahilyabai was born on 31 May 1725 in the village of Chaundi, in the present-day Ahmednagar district in Maharashtra. Her father, Mankoji Rao Shinde, was the Patil of the village. Women then did not go to school, but Ahilyabai's father taught her to read and write.

Her entrance on to the stage of history was something of an accident: Malhar Rao Holkar, a commander in the service of the Maratha Peshwa Balaji Baji Rao and lord of the Malwa territory, stopped in Chaundi on his way to Pune and, according to legend, saw the eight-year-old Ahilyabai at the temple service in the village. Recognising her piety and her character, he brought the girl to the Holkar territory as a bride for his son, Khanderao (1723–1754). She was married to Khanderao Holkar in 1733. In 1745, she gave birth to their son Malerao and in 1748, a daughter Muktabai. Malerao was mentally unwell and died of his illness in 1767. Ahilyabai broke another tradition when she married her daughter to Yashwantrao a brave but poor man after he succeeded in defeating the dacoits.

We appreciate your valuable feedback!!